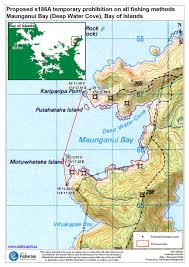 The Fisheries Act Sec 186a Rahui at Maunganui Bay, Bay of IslandsMaori, as the original indigenous people of New Zealand, have a traditional relationship with the sea encompassing spiritual, cultural and practical management aspects. These traditions have a long history in New Zealand and before that with their Polynesian ancestors. In the 1990's the NZ Government negotiated the 'Sealord Deal' which settled the commercial interest in New Zealand's fisheries with Maori. Following the Sealord deal provision was made for Maori to retain access to certain customary fishing practices in the form of regulations amended to the Fisheries Act 1997.

The rights and obiligations of Maori in the Fisheries Act apply to 'estuarine and littoral coastal' areas where traditional relationships with the sea can be proven. These traditional relationships can include food source, spiritual or cultural basis. These tools are designed to give effect to the obligations stated in the Treaty of Waitangi Fisheries Claims Settlement Act 1992. (Sealord Deal) to develop policies to help recognise use and management practices of Māori in the exercise of non-commercial fishing rights. There is no mention of ecosystem protection in these fisheries management tools yet some hapū have utilized these tools with a holistic ecosystem approach. A great example is Te Oko O Tangaroa, the Tangaroa Suite of Ngāti Konohi of Whāngarā. In designing their local marine protection Te Tapuwae o Rongokako Marine Reserve (1999) and a mataitai area. See our Te Tapuwae o Rongokako Case Study example.

Section 186 Temporary closure (Rāhui)
A temporary closure of one or more fished species for up to 2 years per application. In the 2011 Ministry for the Environment MPA indicators report no rāhui met the protection standard.

Taiapure
A customary marine managed area, governed by a committee nominated by tangata whenua and approved by the Minister of Fisheries. The committees role is to advise and provide reccomendations to the minister relating to:

Mātaitai
(via the Kaimoana Customary Fishing Regulations 1998) have the following effect:

NZ has a total of 33 Mātaitai in the South Island and 10 in the North Island covering approximately 367 km2 of marine environment as of February 2014. As of February 2014 only one Mātaitai met the MPA protection standard (type 2) – the 77 km2 Te Whaka O Te Wera Mātaitai, adjoining the Ulva Island Marine Reserve in Patterson Inlet, Stewart Island

A briefing paper on Customary Mangagement by Vince Kerr prepared for the Department of Conservation provides more detail on Mataitai area and the possibility of how they can work alongside marine reserves and achieve conservation gain through development of their by-laws (rules for Mataitai). 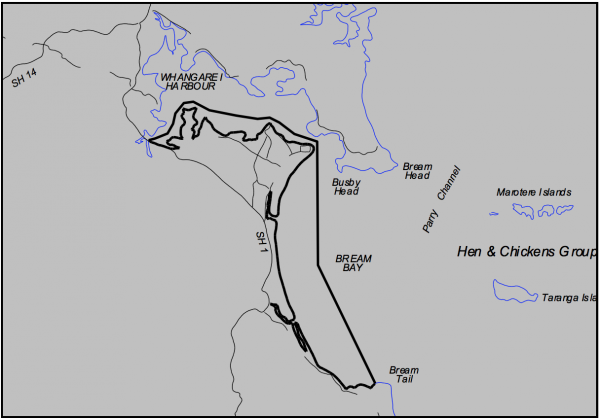 Patuharekeke are a Hapu who hold mana moana on the south side of the Whangarei Harbour, they have a registered a rohe moana via the Fisheries Act Customary regulations and their Kaitiaki are active in managment and restoration issues affecting their rohe. Currently they are involved in Treaty Claims work, a series of Resource Management cases and a very significant investigation and restoration project with the Mair Bank pipi beds and resource. On their web site they have information that can be downloaded which is worth exploring. Patuharekeke web site

TMK is a partnership project between Nga Tahu, Otago University and the hapu of the Otago Coast. They are well established and are doing planning work monitoring and educational projects. We highly recommend the Te Tiaki Manhingakia web site. It has a much fuller description of the customary tools and what can be achieved and there is a lot of material there about what they have achieved, how they have done it and there monitoring and research progra

Check out our collection of documents which you can download from our Library section Traditional Management.

MPI List of Sec 186a and 186b Temporary Closures