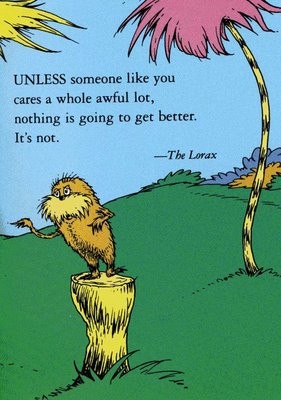 No one can argue with history that shows creating an effective network of marine reserves in New Zealand is a challenging task and is taking decades to achieve. But one can also argue that the need for marine reserves is urgent and that the benefits will be great. History tells us that individuals and community groups can make a difference in conservation. It is happening on land all over New Zealand and it has been done in the sea.

A crucial part of forming a vision of action for you and your group locally or regionally involves gaining some understanding of what isn't working currently and then proceeding with your own positive vision of how to turn this inaction into success for your area and community. 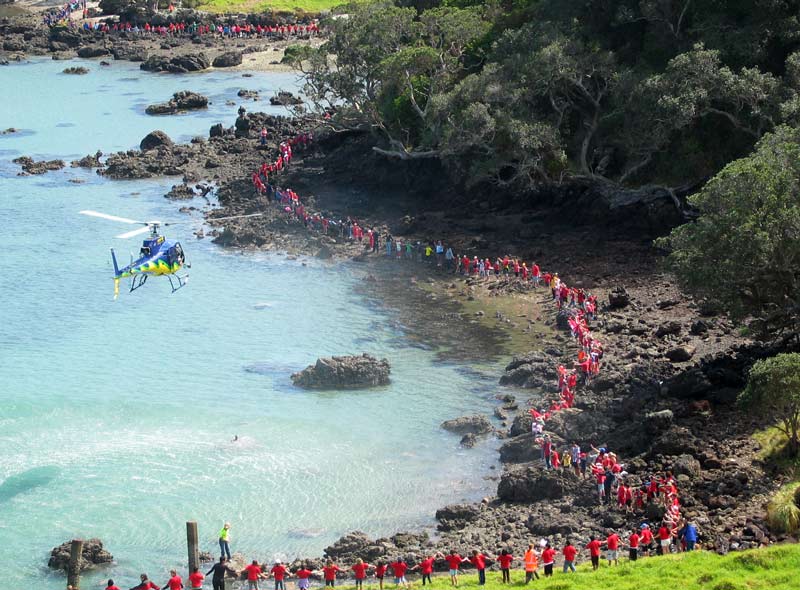 The EMR human chain event, 1,000 Northland students do mexican wave in celebration of the opening of the Whangarei Harbor Marine ReserveA community celebration of the opening of the Whangarei Harbour Marine Reserve initiated by EMR and the Mountains to Sea Conservation Trust. Over 1,000 Northland school children participated! It took ten years to achieve but successive 7th form students from Kamo High School achieved the seemingly impossible and created a marine reserve.

Navigating a confusing landscape of marine protection in New Zealand

How to create a marine reserve in New Zealand has never been more uncertain. In the first thirty years since the passing of our Marine Reserves Act, dedicated community groups and the Department of Conservation enthusiastically lead a number of campaigns around New Zealand to form the beginning of the reserve network we have today. But in the last decade it has become a confused space with Government policy resulting in a very small number of new marine reserves in our coastal areas and none of these where they are needed the most! (where most people live). Under the current 'Marine Protected Area Strategy' there is a change signaled to support regional planning forums. Note this has not been a commitment to lead these processes, rather it has been in supporting those forums that grow out of local action and stakeholder involvement. Forums have now been run for the Auckland Islands, Otago, South Island West Coast, and Kaikoura. In the Auckland Region, DOC supported the Hauraki Gulf Spatial Planning process, which had from the outset an unclear commitment to marine conservation outcomes amidst its many planning objectives.

This change to a forum process is potentially a good move forward, and does to a point reflect best international practice. However the devil is in the detail, and of course the end results.

Here are examples of some of what has gone wrong with our first attempts at running these forums:

The Treaty Challenge and Opportunity 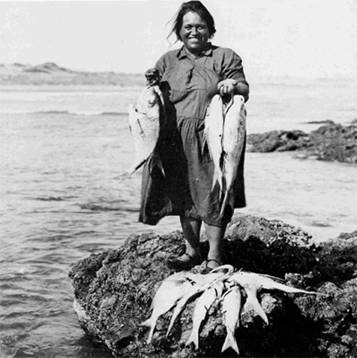 In many parts of New Zealand this was once a common sight and part of daily lifeThis is a complex issue facing marine protection in New Zealand and it is not getting easier. There is however a fantastic opportunity for coastal hapu and iwi to lead the way in marine conservation. For most hapu there is great concern about overfishing and the decline of marine biodiversity locally and regionally. So that is a positive start point. However also for Maori there is serious concern about entering into an agreement with the Crown for an arrangement like a marine reserve which effectively blocks fishing for at least a generation or indefinitely. There are trust issues often where they may see themselves as simply losing access to resources of their rohe moana. Also the Marine Reserves Act is now old legislation and does not do well at supporting and facilitating local management and effective partnership with Maori. Hopefully this legislation will soon be updated.

There are some amazing success stories of maori support and leadership in marine conservation and marine reserves. The most notable is the Te Tapuwae O Rongokako Marine Reserve, which was establish by a local hapu on the East Cape. A fabulous reserve and inspiring story of leadership, demonstrating how a marine reserve can be used as customary tool consistent with the hapu's tikanga. At Mimiwhangata in Northland one of the hapu of the area worked with DOC to propose a marine reserve for their area. In the public discussion document the kaumatua of the hapu Te Iri O Hikihiki lay out their vision of why the marine reserve was needed and how now is the time for restoration of the creatures of the sea. Sadly shortly after the discussion document, DOC ended its support for the marine reserve in preference for a Marine Protection Forum to be set up for Northland, that was in 2005. Today in 2017 the hapu is still working towards its vision of restoration in proposing a new form of traditional rahui. Unfortunately no assistance or support has been offered to date from DOC and no timeline exists for a Northland Marine Protection Forum lead by DOC. These two examples are just two of positive efforts Maori have been involved in all over the country. They demonstrate that a partnership for marine conservation is possible in New Zealand, but it involves working hard at building trust and an agreed approach.

So that is the negative - where to we go from here? 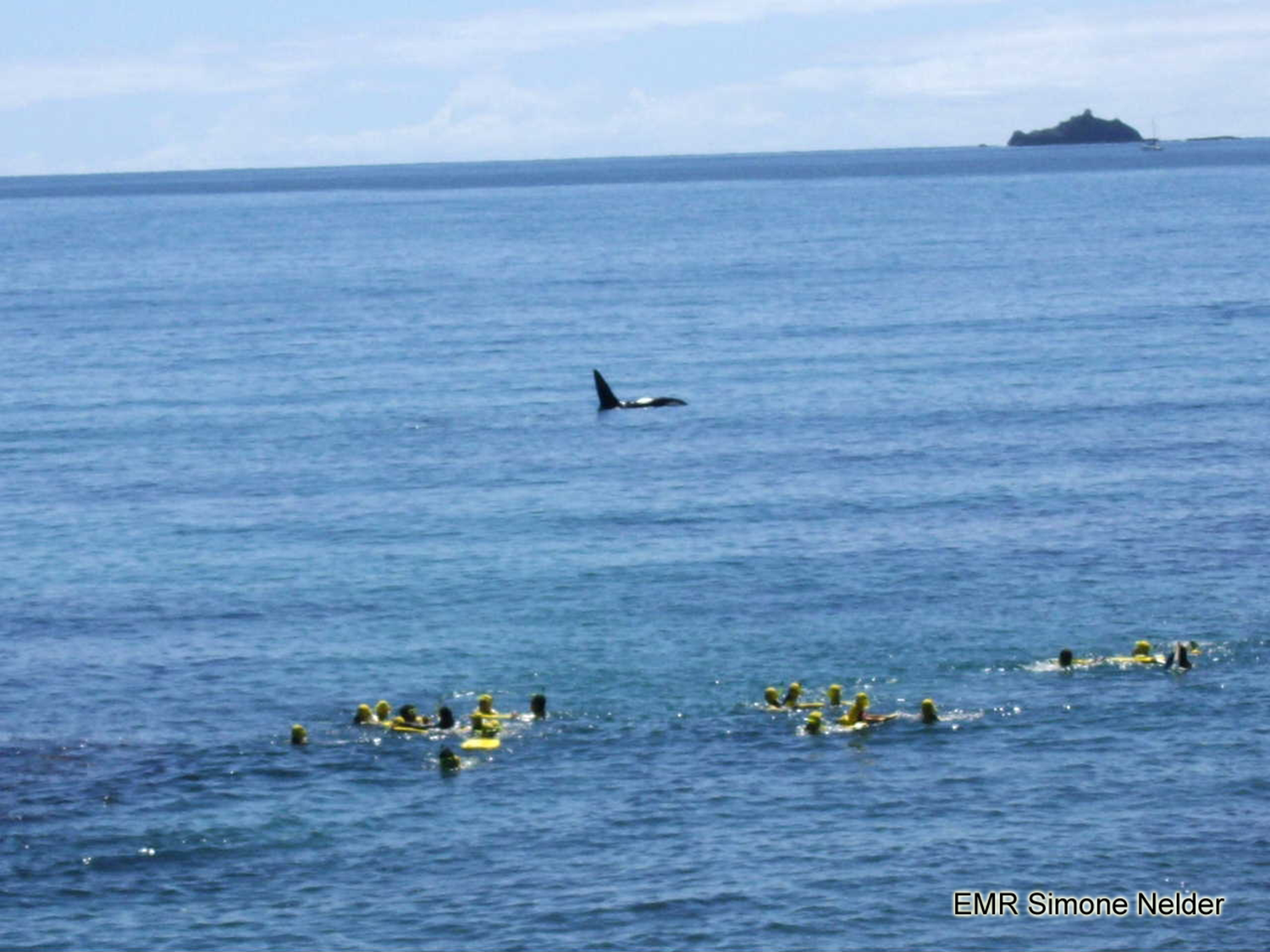 A day to remember forever, EMR snorkelers encounter an Orca, kids need to be able to experience marine life in its natural settingOn one hand it is incredibly important to understand the politics of marine reserves and why our progress has slowed in the last ten years, but far more important is to understand and believe that you and your local group can make things happen in New Zealand and for your area. You need to begin with your own history with the Ocean, what does it mean to you? What has it meant to your family? What do we want for our children and our grandchildren. Create a vision for the future that is worth working towards and get started. Actually many changes and advances in conservation begin this way. It is important go well beyond the status quo when forming your vision. Doing things as we have always done guarantees we repeat mistakes. Our world is constantly changing and how we deal with the challenges of population and economic growth are ever changing, and so must our response to these challenges. The Sea around us was once hugely abundant, so much so that it is now hard to imagine it in its 'natural state'. It has huge regenerative potential. Unlike on land, in the sea everything is connected by currents with larvae  and most species able to travel great distances to restore depleted habitats. On land we work tremendously hard to restore indigenous biodiversity and ecological connectivity. In the sea most of the restoration and ecological connections will just happen naturally if we stop overfishing and control pollution, sediment and excess nutrients from stormwater and land runoff where they are a problem. Go to the history of your coast and community, and your hapu to help construct your vision for the future.

Talk to others around you about your ideas and what you want to do. You will find others who are in the same place, people who want to restore and protect marine life and local habitats. You may want to host meetings large or small to run discussions, invite guest speakers, show movies that stimulate the discussion. You will be surprised at the interest once you begin this process. Write it down and make it real.

A warning: once you start this process it may be very hard to stop.  The sea is our greatest resource on earth, it surrounds us here in New Zealand, it has always been a source of sustenance, abundance, beauty and spiritual well-being. Don't worry you will make many good friends along the way.

So armed with a vision you are ready to begin your journey and that is what the remainder of this web site and all the related resources are there to help you with. Go well we'll talk more about types of actions and shaping your vision in the next section, Strategy. 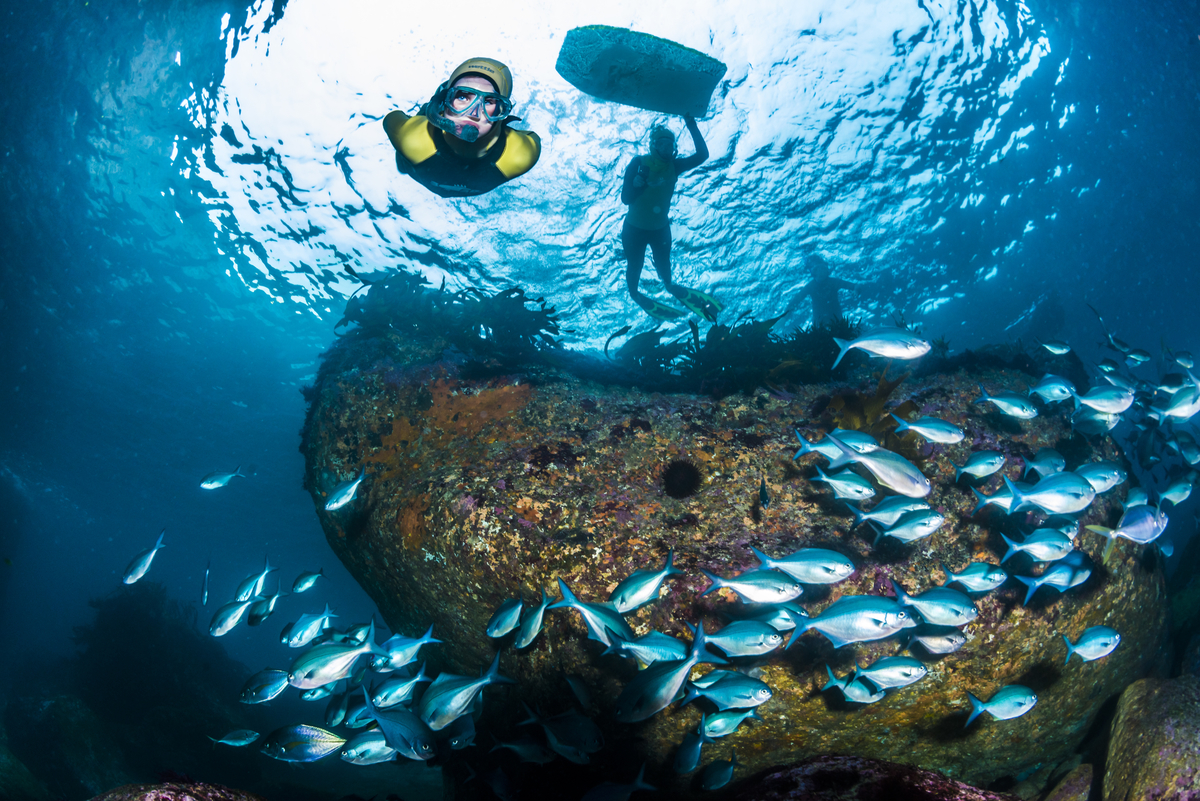