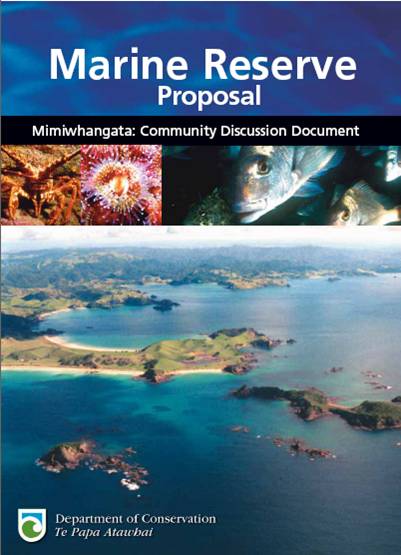 As information gathering, investigations and informal consultation activities progress, your campaign will reach a point where it is time for communication with the community to be stepped up in the form of some sort of publicly distributed document. This is a vital part of the pre-statutory consultation process. These documents can be an effective way to advance all campaign objectives, including information gathering and communication of concepts and information to the community and importantly engaging people you have not reached or involved yet. The documents also serve the purpose of putting officials and the community on notice that you are serious about what you are doing.

In our Library we have a download page with a collection of past marine reserve and proposals and discussion documents.

Before getting into specifics, it is worth discussing the basic difference between discussion documents and draft proposals.

Discussion documents are typically used when a campaign or project is in a very early stage of acceptance or understanding in the community. Normally, in this style of document, the main thrust of the document includes the provision of information and an invitation for people to support the project and to submit their views. Usually boundaries are not identified, but an area of interest or an area that is being investigated may be indicated. In some cases, just an area of coastline may be generally referred to. The idea is to introduce the concepts and benefits of a marine reserve and seek people's involvement and support without getting into the difficult area of arguing over or justifying boundaries. Supporting the use of this strategy is the awareness that people often, understandably, take time to become comfortable with the thought of a marine reserve. For most people, 'no-take' reserves are something that is fundamentally quite new and different. As the benefits may not seem immediately obvious or compelling, marine reserves can create considerable fear. 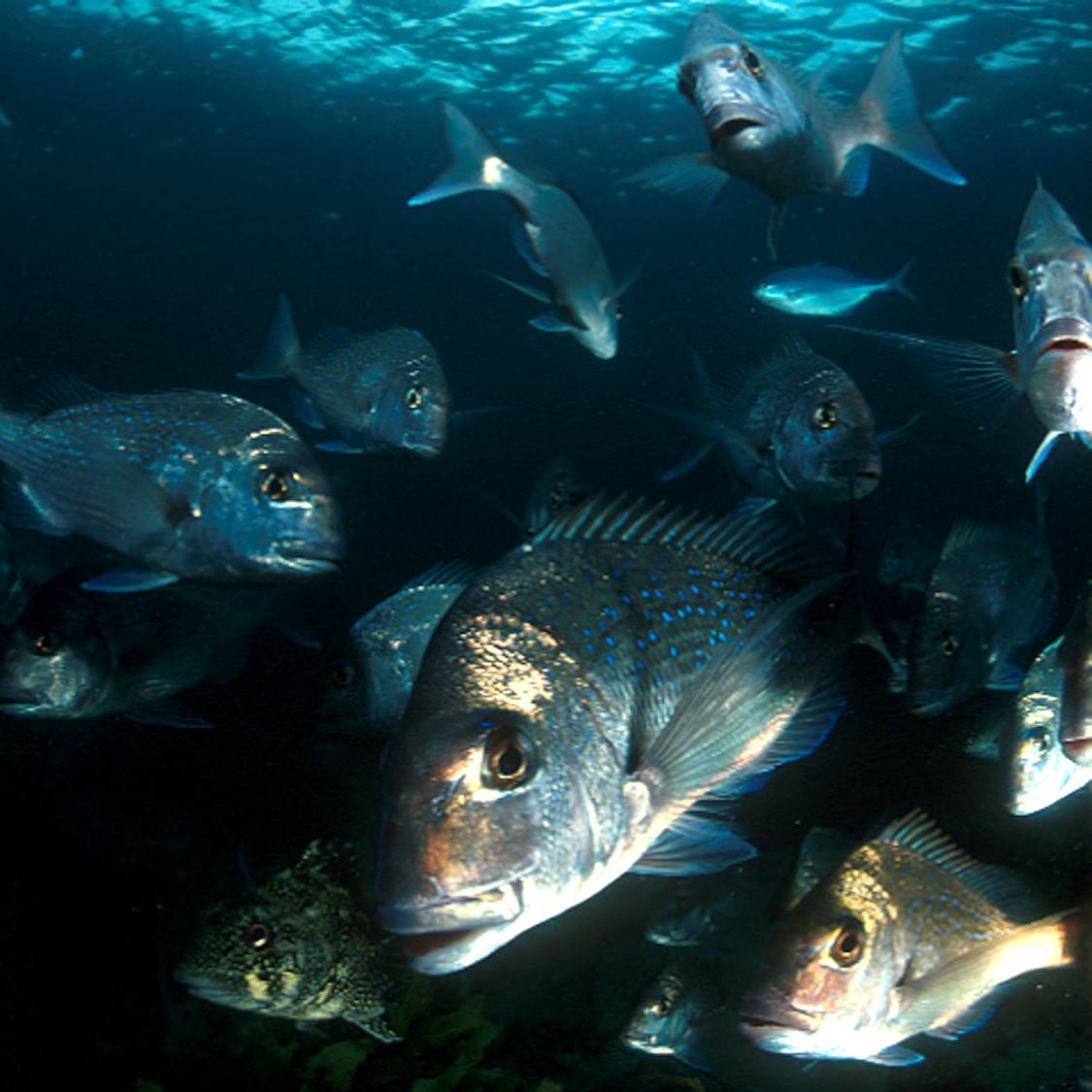 Snapper abundance, photo by Roger GraceThe draft proposal is a document that may follow a discussion document once 'the waters have been tested'. The proposal basically does the same thing as the discussion document, but usually goes another step in making a recommendation on boundaries. This can be in the form of one preferred boundary with a justification or it can be in the form of proposing options for boundaries and then asking for people to comment on those options. It is vital that a firm proposal and boundaries are made public before a formal application can be made, because the applicant must show that there has been public support for whatever has been proposed in the Application. Also, applicants must show that they have consulted with tangata whenua, stakeholders and the community, basically all people that could be affected by the marine reserve.

There are no specific statutory guidelines for the publication of pre-statutory documents. There is nothing to say that you cannot go straight to a draft proposal and then straight to the formal application. The real issue here is a process one. What is the best way to engage and involve your community in what you are trying to do.

We suggest you study what past past groups have done, and adapt their ideas to your local circumstances; only your campaign group can make the decision on what's best for you and your community. Our Library has a download page with explanatory notes of a wide collection of past proposal and formal application documents.

As a general rule, the opportunities to do the most effective advocacy and education work arise at the earliest stages of the process, not in the final stages. By the final stages, the views in the community have tended to become polarized, so that it becomes hard to make headway when talking about the important conservation issues which are the real drivers of this work.

We would also like to remind you again of two very useful 'How to' resources that discuss making proposals and the process of working with community:

The DOC 2002 Handbook for Applicants: Formulate a proposal for public comment. This section provides a good guide to the contents of your proposal and discussion documents.

Dr Bill Ballantines archive of papers all about marine reserves and his book Marine Reserves for New Zealand, the 'bible' for understanding the principles and how to get them across. 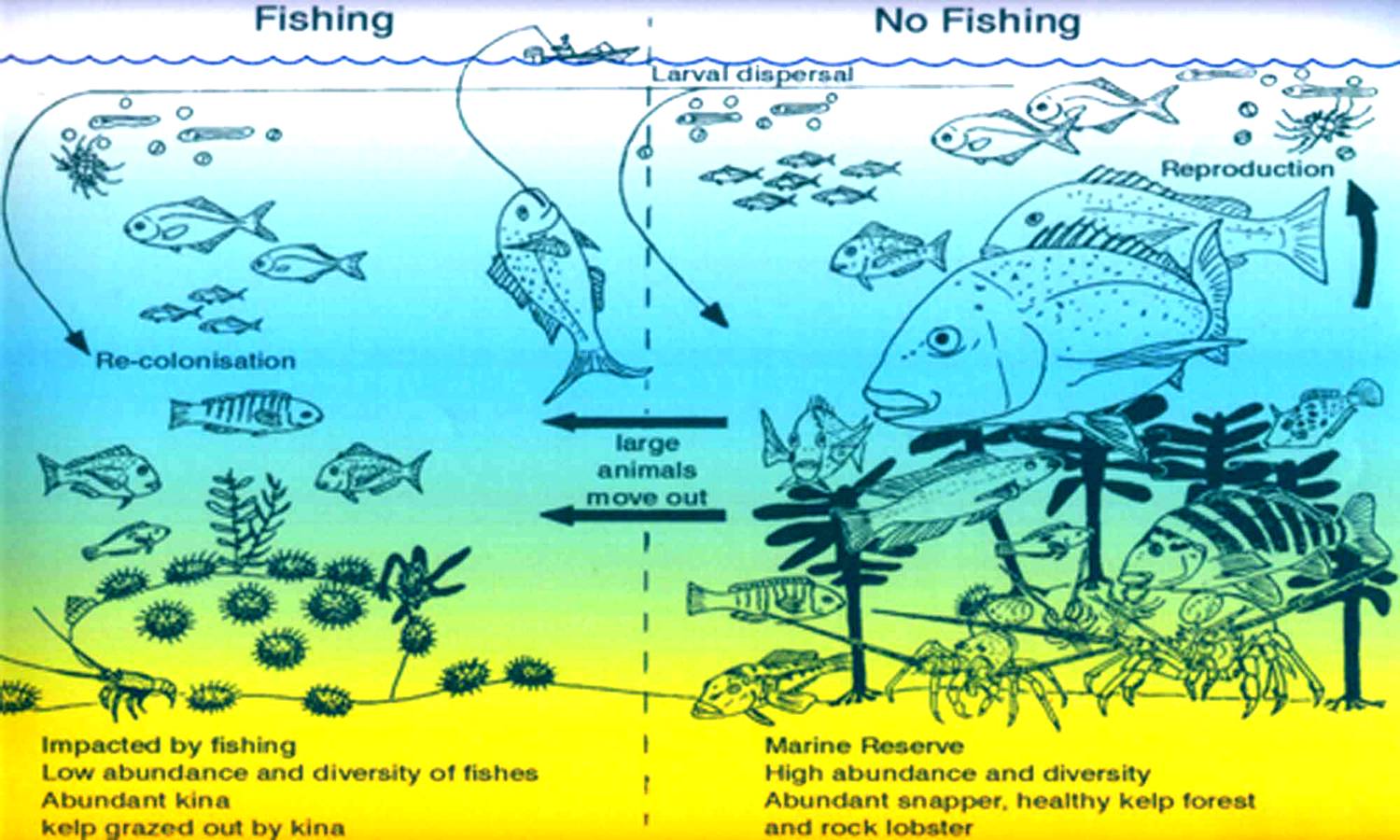 Graphic comparison of in and outside a marine reserve, by Roger GraceA major aspect of what happens during a discussion document or proposal period is that you get many opportunities to talk to the community, interest groups, and the media. You should plan to make the most of this opportunity.

Following the proposal period normally people have a chance to make a submission. This creates another important opportunity for you to engage with the community. It is well worthwhile creating a well written and thorough report on what came back to you via the submission. You may also want to summarise the feedback you received during any meetings from this period.

Two good examples of reports on submissions to discussion documents are:

The Bay of Islands marine reserve proposal, report on submissions